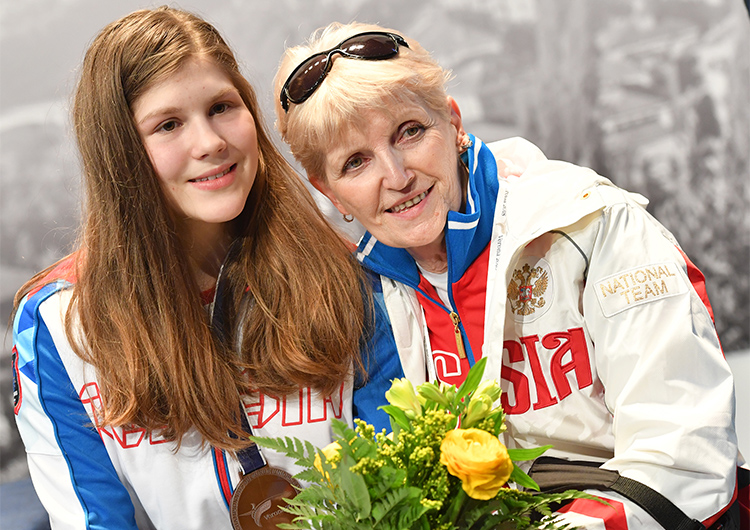 Vseslav Morgoyev: “In Buenos Aires each fencer will have a chance to win two medals”

At the Fencing events at the 3rd Youth Olympic Games  Russia will be represented by epee fencers Artur Tolasov and Yana Bekmurzova, and sabre fencer Alina Klyuchkova (at the picture with the coach Natalya Dyachenko). They went through the qualifying events in April at the World Fencing Championship for Cadets and Juniors in Verona, Italy.

At the Fencing events at the 3rd Youth Olympic Games  Russia will be represented by epee fencers Artur Tolasov and Yana Bekmurzova, and sabre fencer Alina Klyuchkova (at the picture with the coach Natalya Dyachenko). They went through the qualifying events in April at the World Fencing Championship for Cadets and Juniors in Verona, Italy.

On 8 Setember Yana Bekmurzova celebrated her 15th birthday. As well as Artur Tolasov, who will turn 16 on 21 September, she is trained by Vseslav Morgoyev at the Moscow Specialized School of Olympic Reserve No.3. Success came to the athlete at the end of last year and this year. During this time Yana managed to win third place at the All-Russian Cadet Championship “Anchikov Palace”, at the Russian Junior Championship (among athletes born between 1998 and 2004) and at the European Cadet Circuit in Bratislava. She also won last year’s National Championship among children, born before 2003, the New Year Tournament in memory of I.Bren in Kazan, and the Moscow Tournament for the prize of a two-time Olympic champion Karina Aznavuryan.

Artur Tolasov in 2017/2018 won the tournaments in Bratislava and Saint-Petersburg (Anichkov Palace) and some top places at the competitions in memory of N.Porfiryev and I.Bren.

As for Alina Klyuchnikova, for the moment her main achievements are silver and bronze medals at the World Cadet Championship of the last five years. Five months ago in Verona 17-year-old sabre fencer from Saint-Petersburg reached the semi-finals, where she was defeated by the future winner of the competition Liza Pustai (Hungary) with the score 9:15. Klyuchnikova also was defeated by Liza in the 2017 World Cup finals in Plovdiv.

The Russian mini-team of fencers will go to Argentina with Vseslav Morogov, Bekmurzova’s and Tolasov’s personal coach. In the interview to the ROC Information Service he named the factors that can be decisive in the fight for medals.

– Can the general level of the Junior Olympic Tournament be compared to the one of the World Cup in your sport?

– There will definitely be strong athletes in Buenos-Aires. But due to the limited quota (one athlete from a country in each event) it is impossible to gather all best athletes at the Youth Olympic Games. Psichological condition will be of crucial importance. Olympics is a fight of nerves.

– Does the competition in Buenos-Aires fit into the general calendar of events of your trainees?

– Unfortunately, we could not escape overlapping. Artur will have to miss the Tournament of the Cadet Circuit in Serbia, scheduled for 20 October, and Yana will not perform at the Golden Blades tournament to be held on 14 October in Moscow.

– The Fencing continental team tournament is planned to be held at the YOG. Can you tell us about it?

– I do not know the details. I only know that following the results of the personal competitions men’s and women’s teams of six will be formed (foil, epee and sabre). these teams will represent different continents. The number of quota places is no more than two for each country. Thus our guys have a chance to win two medals.

– Well, participants of the Buenos-Aires Games have stars to steer by.