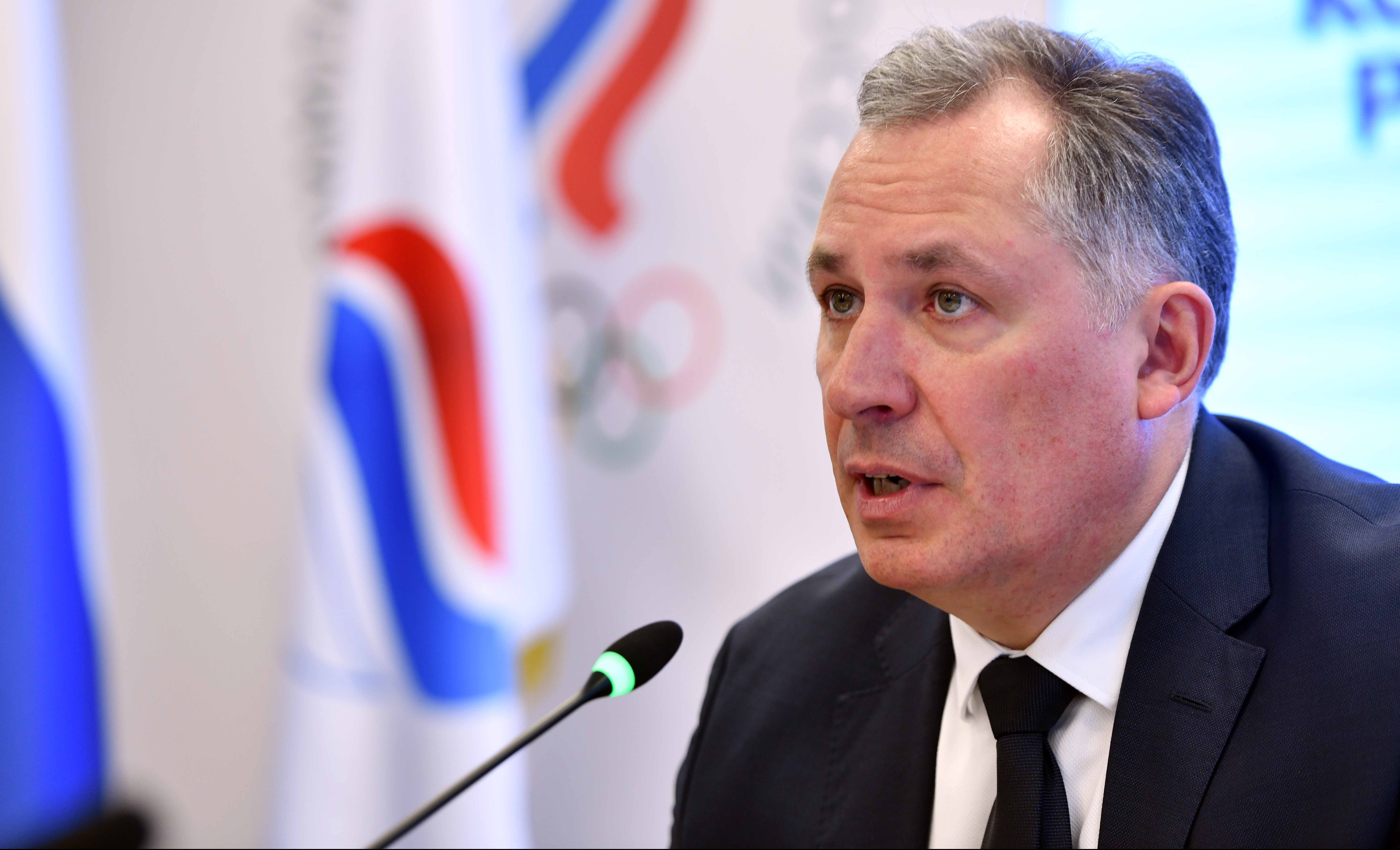 The results of the performance of the sports sector in 2019 and the relevant problems faced at present were discussed by members of the Board of the Ministry of Sport via video conference.

The results of the performance of the sports sector in 2019 and the relevant problems faced at present were discussed by members of the Board of the Ministry of Sport via video conference.

Members of the Board Meeting assessed the performance of the sports sphere in 2019 as satisfactory.

We present the speech of the President of the Russian Olympic Committee Stanislav Pozdnyakov.

Competitions will be held in 41 sports, including six new ones in the Olympic Programme: baseball, softball, karate, surfing, rock climbing and skateboarding. Compared to the 2016 Olympic Games in Rio de Janeiro, the number of sports disciplines increased from 306 to 339.

In addition to Tokyo, the Games will be held in Enoshima (sailing), Izu (cycling), Fukushima (baseball, softball), Sapporo, Miyagi, Saitama and Yokohama (football).

Due to the postponement of the Olympic Games, the Organizing Committee is currently coordinating with the owners of sports facilities to ensure the possibility of holding competitions there in 2021. The situation should finally become clear in September 2020. In this regard, changes to the competition schedule are possible.

The Olympic Village in Tokyo is divided into two zones – the residential zone and the international one. The residential zone, in addition to houses, has a canteen, a clinic, a sports information center, a NOC center and a meeting room for delegation heads. The international zone has an accreditation center, a post office, a bank and numerous stores. This zone will also host the Flag Raising Ceremony. Enoshima and Izu have a wide range of hotels providing accommodation.

In addition to the Olympic Village, the ROC has booked rooms in the hotels of Tokyo:

Shiomi Prince – additional officials (coaches, doctors, massage therapists who might not be accommodated in the Olympic Village, but have official accreditation and access).

All these hotels are located in the Port zone. Furthermore, the ROC has booked the Hokke Hotel for sailing and the Fujisan Mishima for cycling near Olympic facilities.

However, due to the postponement of the Games, the Organizing Committee is currently negotiating with hotel owners to extend their agreements for 2021 with special prices for National Olympic Committees. Changes are due to be completed by the end of June.

The International Olympic Committee has set the date July 5, 2021 as the deadline for submitting sports application forms for participation in the Olympic Games. After this date, replacements will only be possible for medical reasons.

Doping control at the Games will be carried out by the International Testing Agency (ITA), an independent organization to which the IOC delegated this right. The Tokyo 2020 Organizing Committee will take samples, while analysis will be carried out by a WADA accredited laboratory. In case of violations of anti-doping rules, the ITA will appeal to the Court of Arbitration for Sport (CAS) which will announce further steps.

Representatives of the ROC carried out several trips to Japan in order to study the conditions for the Games. As part of the trips, issues connected with accommodation, transportation, logistics, communications, and the placement of additional officials were addressed.

Working meetings were held with the leaders and head coaches of the Russian sports federations that had passed the selection stage, as well as those in the application process. Based on the results, preliminary schedules of the conclusive stage of training, outfitting and air travel were laid out, and issues involving additional funding for the sports federations are being regularly addressed.

The outfitting of the Russian Olympic delegation will be carried out by the official outfitter of the Russian Olympic team ZASPORT, which already has experience in supporting large-scale international competitions. The design of the Olympic sports wear was reviewed and approved by the IOC at the end of 2019. The preliminary outfitting schedule has been created, but it will be adjusted in accordance with the final stage of preparations for the Games, which will also undergo changes due to the postponement of the Games.

The Russian Olympic Committee provides insurance coverage for the participants of the Games, and takes on the responsibility of manufacturing souvenir, identification and award paraphernalia for members of the Russian Olympic team.

The departure of the Russian Olympic delegation to Tokyo and the return flight to Moscow were supposed to be organized by regular Aeroflot flights. However, the partnership agreement with Aeroflot expires at the end of 2020. Currently, negotiations are underway with Aeroflot to extend it.

Regarding the issue of staying at the Olympic Village, we managed to reach an agreement with the Organizing Committee on placing the Russian Olympic team at a certain distance from the transport hub, practically in a separate building, where the team’s headquarters and medical center will also be located. In August 2019, during the seminar of the heads of sports delegations, we had the opportunity to inspect this building, including the residential and non-residential premises. The accommodation is quite comfortable with rooms designed for 1-2 people.

An indispensable condition for participating in the Olympic Games is to undergo an in-depth medical examination (IME). It should be noted that athletes who do not pass the IME will not be allowed to participate in the Games. This condition remains unchanged despite the postponement of the Games.

Accreditation was opened on January 17, however, the process is not yet complete. The Organizing Committee has established new terms for accreditation. The accreditation process will resume in January 2021, and will conclude in April 2021. More detailed information on this issue will be presented later on.

The ROC Executive Board in December 2019 approved the Procedure and Principles for forming the Russian Olympic team for participation in the Games. Currently, international federations are updating their selection criteria due to the postponement of the XXXII Summer Olympics.

The ROC has already received specific criteria from the majority (36 out of 41) of the international federations represented in the Olympic Programme, approved by the IOC Executive Board. After the remainder is obtained, we will again turn to the Russian sports federations with a request to adjust their own procedure and principles for forming the national teams for the Games in order to re-approve these documents at the ROC Executive Board, as the previous one has lost its validity.

It is worth noting that the calendar of international kick-offs has not yet been completely drafted, which is primarily responsible for federations determining their own procedure and principles. We hope to finalize this work in late 2020 – early 2021.

Starting from 2016, preparations for the upcoming Games were conducted in accordance with the activities of eight key areas of the ROC’s directions reflected in the Programme and 925.35 million rubles were allocated to this end.

Due to the postponement of the Games of the XXXII Olympiad to 2021, and based on the decision of the ROC Executive Board dated 07.04.2020, the implementation period of the Tokyo Programme was increased by one year to 30.09.2021, including the accounting period. To ensure funding for 2021, an additional 265 million rubles were allocated.

I would like to draw special attention to the fact that today there is not a single federation that would be denied financing by the ROC and that in the run-up to the Olympics, the ROC plans to spend an additional 425.78 million rubles specifically to financially support the activities of the federations in preparation for the Games.

When planning training events and participation for the Games, the leadership of the sports teams of Russia must take into account the acclimatization features in this region. Taking into account the implemented ROC projects of “Adaptation Rio” and “Adaptation Pyeongchang” (which included 96 athletes and 7 Russian sports federations), a detailed research programme on studying the effect of chronobiological and climate-geographic features of the Olympic venue on athletes was prepared, along with studies on the psychophysiological aspect.

At the time of drafting the report, 200 representatives of 13 sports (16 disciplines) were taking part in the ROC’s project “Adaptation Tokyo.”

In January 2020, the ROC, jointly with the Center for Strategic Planning of the Russian Ministry of Health and the FMBA of Russia, summed up the results of the project at the scientific and practical conference with participation of all interested Russian sports federations.

Based on the data obtained, common approaches and algorithms for the acclimatization of athletes were developed. The approaches to proper acclimatization were tested, depending on the duration of the athletes’ participation (one-day events, multi-day events). In addition, programmes of extra-training effects were also tested in terms of correcting the negative manifestations of desynchronization and climate-zone displacement, along with ways of optimizing athletes’ conditions.

The Federal Scientific Clinical Center for Sports Medicine of the FMBA prepared and sent the relevant recommendations for coaches, athletes and staff to the sports federations.

These studies expand the scientific and methodological base accumulated by the ROC to identify the chronobiological and climate-geographic characteristics in the specific Olympic venue, aimed at achieving the optimal level of functional preparedness by following the recommendations of coaches and specialists.

The Olympic Games in Tokyo will be widely covered in the Russian federal and regional media. Currently, over 100 media representatives have received official accreditation.

It is expected that all competitions with the participation of Russian athletes will be broadcast live.

The Russian Olympic Committee has conducted intensive work in order to prepare for the Olympic Games, but as they have been postponed, it has largely returned to square one. Now we are waiting for the updated information from the Organizing Committee on numerous issues.

The Organizing Committee itself partially resumed full-time work on June 1 and it is not yet able to provide proper answers to our requests and inquiries from other NOCs. Looking ahead, we have an uphill climb, mostly repeating what has already been done the first time round.

Based on the mutual understanding and assistance of our colleagues from the Ministry of Sport, the sports federations, the FMBA of Russia, physical culture and sports management bodies of the constituent entities of the Russian Federation and other interested parties, we will be successful in solving the challenges that lie ahead.

On a separate note, I would like to touch upon the creation of a joint working group in conjunction with the Ministry of Sport of the Russian Federation. The working group is responsible for analyzing the negative impact of the current situation on the sports federations and presenting various options for their support. To obtain the necessary information and a clear understanding of the lost revenues in regard to the sports federations, the Russian Olympic Committee has commissioned a study on assessing the prospects for financing high-achievement sport in Russia by each individual sport included into the Olympic Programme.