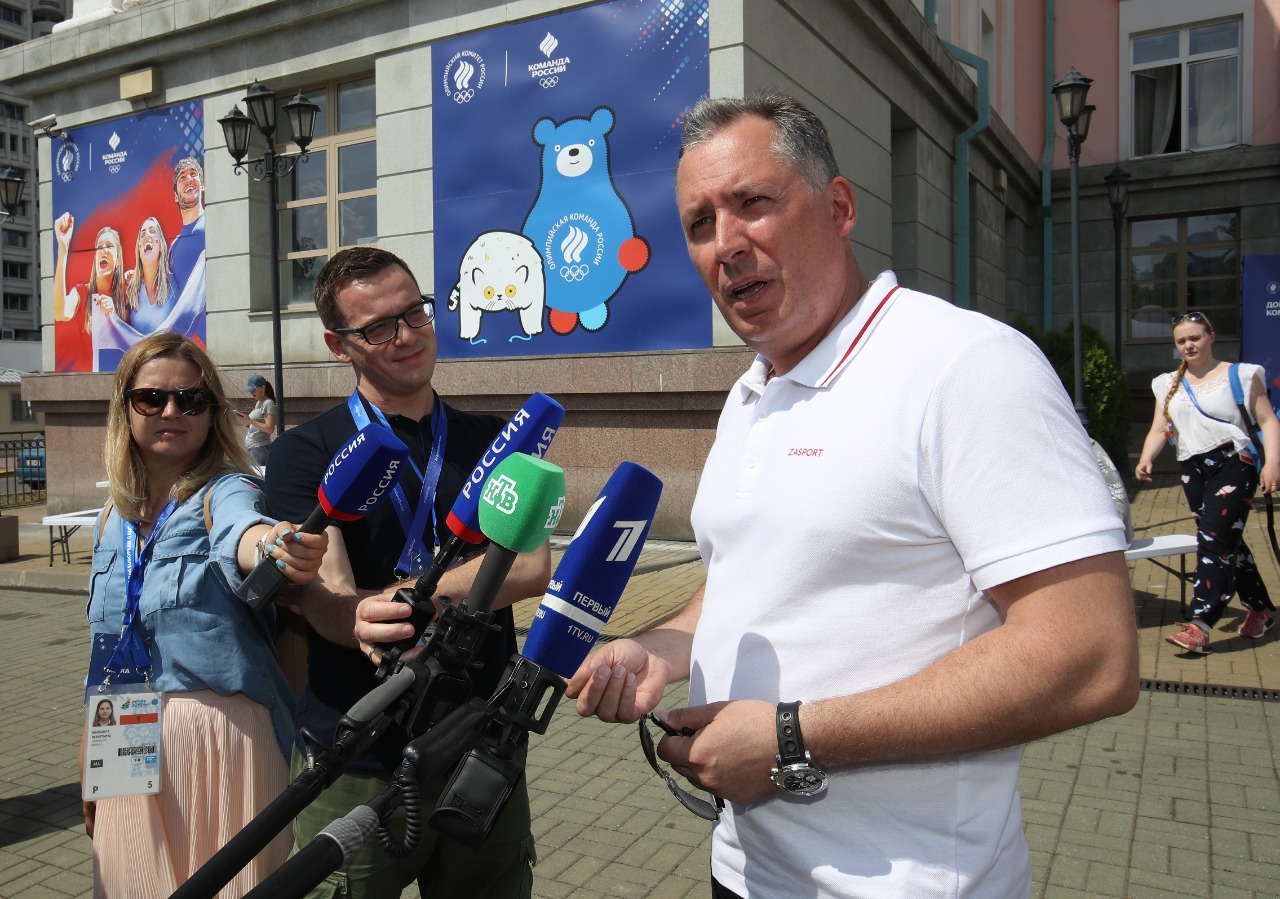 Stanislav Pozdnyakov: “The European Games have a great future”

After the official events in the House of Fans of Team Russia came to an end, the President of the ROC answered journalists’ questions on the second floor of the comfortable media centre located in the heart of Minsk.

After the official events in the House of Fans of Team Russia came to an end, the President of the ROC answered journalists’ questions on the second floor of the comfortable media centre located in the heart of Minsk.

– We have tried to make everyone comfortable here, including numerous journalists who came to cover the 2nd European Games, – noted Stanislav Pozdnyakov. – We hope that the House of Fans will become a universal platform for the demonstration of our Olympic history and sports opportunities with our colleagues from Belarus.

By the way, among the exhibits there is a stand dedicated to the Olympic Games in Moscow. Let me remind you that next year it will be 40 years since the first Olympic Games were held in Eastern Europe. IOC President Thomas Bach and the leaders of 10 National Olympic Committees have already confirmed their participation in the festivities in the Russian capital. Furthermore, we will send invitations to all champions and medalists of the Moscow Games.

As you know, the European Games have already begun. Today, the men’s and women’s 3×3 basketball teams have won their first victories. The first step towards victory has been made, now other athletes will try to follow suit

We have quite a good team here. 225 athletes arrived in Minsk, including the winners of the 1st European Games in Baku, Olympic champions, and honoured masters of sports. By the number of participants, we have surpassed even the hosts. Russian athletes will participate in every programme. It is important for us to develop not one or two disciplines, but all other disciplines. People in Russia love sports and they understand it well.

Now I will go to the Olympic Village to meet with our athletes who are already in Minsk. As far as I know, everything is fine and the living conditions are comfortable. They say that even the hotel rooms are much better than the ones at the Olympics!

I would like to stress once again that Russian athletes will perform here without any restrictions on the use of national symbols.

The EOC flag was raised in the Olympic Village yesterday and the opening ceremony of the 2nd European Games will take place tonight. I have already visited several sports facilities and I can say that they are of the highest standard. It is very important that the organisers have involved and transformed existing arenas, therefore fully meeting the requirements of the 2020 Olympic Agenda.

The President of the ROC also explained how the European Games are different from similar competitions in other continents.

– In Minsk, Olympic qualifying tournaments for 12 sports will be held. The Asian Games, for instance, are held in the middle of the Olympic cycle and therefore licenses cannot be

obtained for them. The Pan American Games start in the pre-Olympic year, but after the end of the summer season when the Olympic selection process comes to an end.

The European Games are still in their early stages, but over time they will become the second important multisport event in Europe after the Olympic Games. Once again I would like to highlight that the European Games have very convenient time frames. They are held a year before the Summer Olympics and international federations can conduct qualifying tournaments as part of the Games. This will attract high-level athletes, which in turn will increase the marketing value of the European Games and their appeal to fans. I have no doubt that this project has a great future.

Journalists inquired whether there would be increased attention from WADA to Russian athletes in Minsk.

– As far as I know, during the European Games, WADA plans to test about 1,000 samples for doping. Particular attention will be paid to particular sports from the so-called risk zone. Such athletes will undergo doping control more often than other athletes. Team Russia will be tested on a common basis and in a scheduled manner as planned, – said the head of the Russian Olympic Committee.