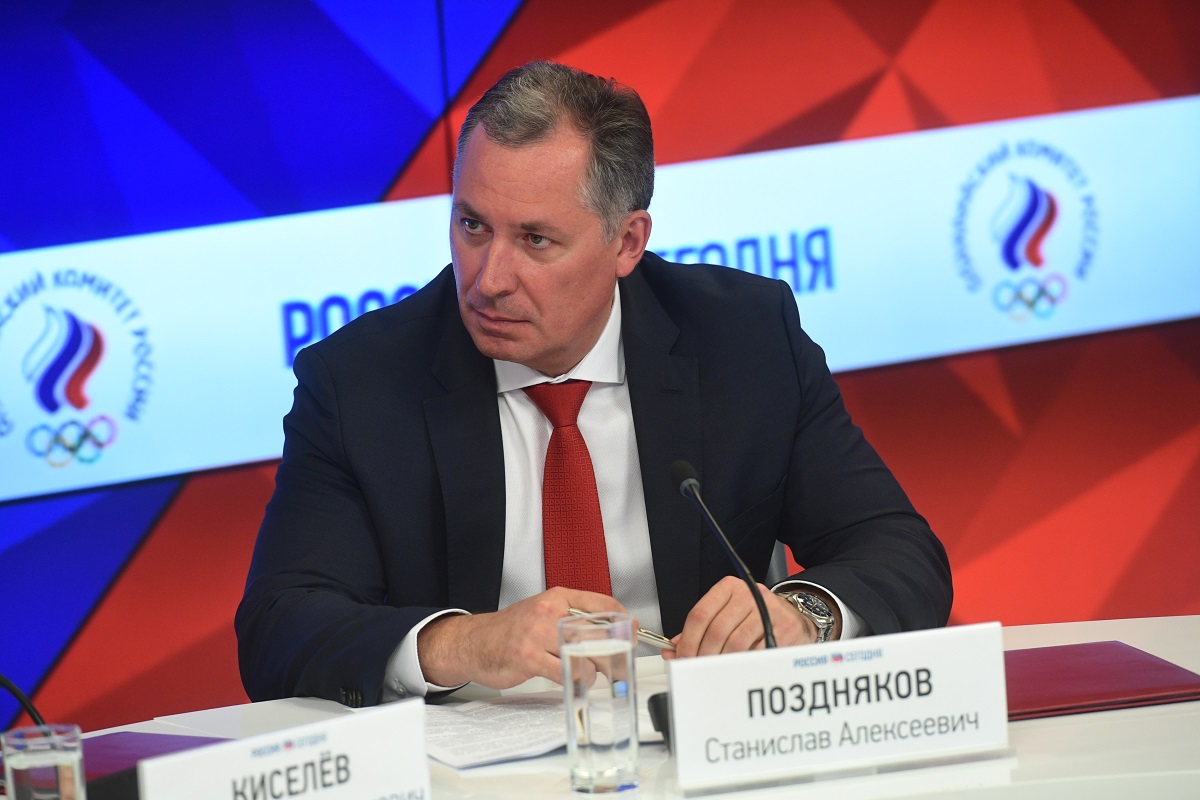 Stanislav Pozdnyakov: “The IOC and the ROC have a common opinion on many issues”

“Russian athletes will take part in all types of programs and today the composition of the team leaving for Minsk is fully approved”, Stanislav Pozdnyakov said. “There are 225 people from more than half of the regions of our country. 124 men and 101 women. The average age in the team is 26.

In addition, it should be noted that 48 athletes have experience playing at the European Games in Baku, of which 18 people in 2015 became winners. So, we have a serious lineup, aimed at team success. In Minsk, Russians plan to win 70 medals, 30 of them are of the highest dignity”, Head of the ROC stressed.

Speaking about the preparations for the Games in Minsk, Stanislav Pozdnyakov noted the assistance of the Russian Olympic Committee (OCR) partners.

“In the capital of Belarus, our athletes will fly with Aeroflot. The process of equipping athletes in the flagship store of the ZASPORT company has already begun, and we plan to send the first group of athletes to Minsk on June 18”, said Stanislav Pozdnyakov.

Head of the ROC also noted that all organizational issues have been resolved.

“Athletes will be housed in the European Olympic Village, specially built for the Games.

During the competition in Minsk, we will have a special medical center organized by the ROC and our partners from the Federal Medical-Biological Agency. At any time, 38 specialists from the field of medicine and physiotherapy will provide the necessary qualified assistance in the preparation and rehabilitation of athletes”, said Stanislav Pozdnyakov.

The President of the ROC touched on the issue of the House of Fans, which will function in Minsk from June 21 to June 30.

“I really hope that it will become a place of attraction not only for fans from Russia. I know for sure that our team has a lot of fans in Belarus. In the House of Fans, we plan to hold award ceremonies for the winners and prize-winners of the Games, other festive events”, Head of the ROC emphasized.

The journalists at the press conference were interested in the question of the status of the Russian athletes at the Games in Minsk.

“Our team consists of 19 athletes. Thanks to the work done, they are provided with the opportunity to participate in the national form and under the Russian flag. I want to emphasize that competitions under the auspices of the Olympic Movement always correspond to the motto of equal rights and opportunities for all participants”, stressed Stanislav Pozdnyakov.

The President of the ROC also spoke about the main issues discussed at his recent meeting with the leadership of the IOC.

“There were a lot of topics, and among them the state of things in athletics, where the All-Russia Athletic Federation (ARAF) is still deprived of membership in the International Association of Athletics Federations (IAAF). It’s important to stress that the IOC and the ROC share the opinion about the same rights that must be observed for all athletes participating in the Olympic Games.

Of course, the ROC was disappointed by the recent decision of the IAAF Council not to reinstate the All-Russian Athletics Federation. But together we will continue to look for ways out of the crisis. All parties are interested in this, including the IOC. I have an inner feeling that a compromise will be found”.

It is pleasant to note that President of the IOC, Thomas Bach, highly appraised the International Forum of Young Olympians held in Moscow on June 1. In his opinion, this event is aimed at the category of young athletes who are implanted by modern anti-doping culture through our efforts. The IOC strongly welcomes the holding of the International Forum of Young Olympians and promises its support in the medium term.

After that, the participants of the press conference, which took place in a teleconference mode with Minsk, returned to the discussion of the European Games. Answering the question of the Belarusian journalists about the work of the House of Fans, Stanislav Pozdnyakov reminded of one important date.

“Next year we will celebrate the fortieth anniversary of the Olympic Games in Moscow. We have already started to seriously prepare for this event. In the House of fans there will be expositions devoted to the history of the Soviet Olympic Movement”.

“It’s a very important event for Russian sports. The main venues of celebrations will be opened in Luzhniki in Moscow. In addition, the Olympic Councils of all regions of the Russian Federation will hold their own holidays.

This year, the All-Russian Olympic Day is dedicated to the Games in Minsk, so all the main venues will be used to cover the sports presented at the European Games.

The table of events is designed for those who are not indifferent to sport and healthy lifestyle. I invite everyone to join the team of Olympic champions, who are waiting for you in Luzhniki. We must demonstrate friendship, solidarity and Olympic calmness before all the challenges that we face”, Stanislav Pozdnyakov concluded.