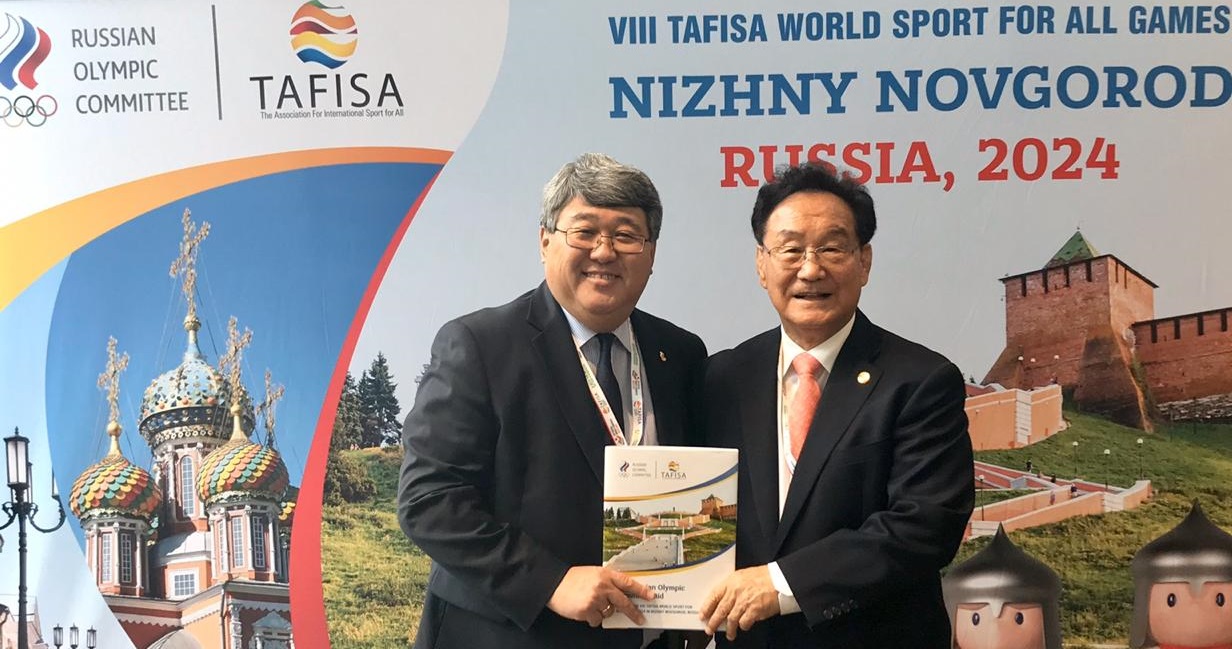 8th TAFISA World Games to be held in Nizhny Novgorod!

Nizhny Novgorod was announced as the host city for the 8th TAFISA World Games during the TAFISA General Assembly held in Tokyo on November 13-17. The amateur sports festival will be held in 2024 and for the first time ever the ROC will organize this large-scale sports event.

Nizhny Novgorod was announced as the host city for the 8th TAFISA World Games during the TAFISA General Assembly held in Tokyo on November 13-17. The amateur sports festival will be held in 2024 and for the first time ever the ROC will organize this large-scale sports event.

– The Russian Olympic Committee develops and supports not only high achievement sports, but also mass sports by implementing the Olympic Country Programme, – said ROC President Stanislav Pozdnyakov. – For us, this is relevant and important work as mass sports improves the health of the nation.

When the opportunity arose to become the first National Olympic Committee to organize the TAFISA World Games, we approached the preparations with great responsibility. We are the first NOC to organize this event and this is important for us.

The Games will feature more than one hundred traditional and national sports. This is not a competition in the generally accepted sense, but a festival. There are no losers here, all the participants are winners!

The head of the Russian delegation in Tokyo, the ROC Director General Vladimir Sengleev, noted that from this moment on, active preparations have begun for the 8th TAFISA World Games.

– We are very pleased that the members of the TAFISA General Assembly unanimously voted for Nizhny Novgorod, – he emphasized. – The leaders of TAFISA have visited this wonderful city several times and have seen for themselves the potential of Nizhny Novgorod to host such a large-scale event with its sports facilities and necessary infrastructure.

On its part, the ROC did everything possible to submit a diverse application, which was done with great interest and inspiration. We are pleased that the application made such an impression on the members of the General Assembly.

Although the Games are to be held in 5 years, comprehensive preparations have already commenced. The free format of TAFISA World Games gives us the opportunity for creativity and development. We want to organize a real sports amateur carnival in Nizhny Novgorod! And, of course, it is very important for us that the Russian Olympic Committee will go down in history as the first National Olympic Committee to conduct the TAFISA World Games. – I would like to thank everyone who supported our application and I can assure that we will do our best to organize the Games at the highest level. Today, concerted efforts are being made in the region to develop grass root and professional sports as part of the national project “Demography” and also within our own competency. In addition, in 2021, Nizhny Novgorod will celebrate its 800th anniversary. This will allow us to make the city even more convenient for residents and tourists. The region has already proved its status as one of the centers for sports development in the country, and the TAFISA World Games will be the icing on the cake.

The TAFISA World Games, supported by the IOC and UNESCO, have been organized every four years since 1992. The Games have been hosted by Bonn, Bangkok, Hanover, Busan, Šiauliai and Jakarta. In 2020, Lisbon will host the 7th TAFISA World Games, attracting Sport for All enthusiasts around the world.

The main objectives of these competitions are to preserve traditional sports, promote new types of sport, encourage cooperation and the exchange of experience between sports fans and enthusiasts from different countries.

In accordance with the regulations, only a member of this association can become an organizer of the TAFISA World Games. Therefore, Russia’s application was submitted by the Russian Olympic Committee, included into TAFISA in 2017.

It is planned that during the TAFISA World Games Nizhny Novgorod will also become the main venue for All-Russian Walking Day. A special link-up will unite 11 cities from each time zone of our country. All the participants and guests will take the hiking route in the capital of Nizhny Novgorod Region. Walking Day will come to an end on the central square of Nizhny Novgorod, where a platform will be organized for exhibition performances on national and new sports.

On the so-called “School Day”, members of delegations from 100 countries will visit about 80 educational institutions of Nizhny Novgorod Region, where they will hold demonstrations and master classes.

The festival of traditional sports will take place on the streets, squares and embankments of Nizhny Novgorod, and on the final day of the Games, participants and guests will get acquainted with the sights of the region.

In addition, an international conference is planned within the framework of the 2024 World Games on the development of grass root sport and the role of the IOC and National Olympic Committees in this regard.

The official part of the 8th TAFISA World Games will end with a closing ceremony due to be held on the main square of Nizhny Novgorod.