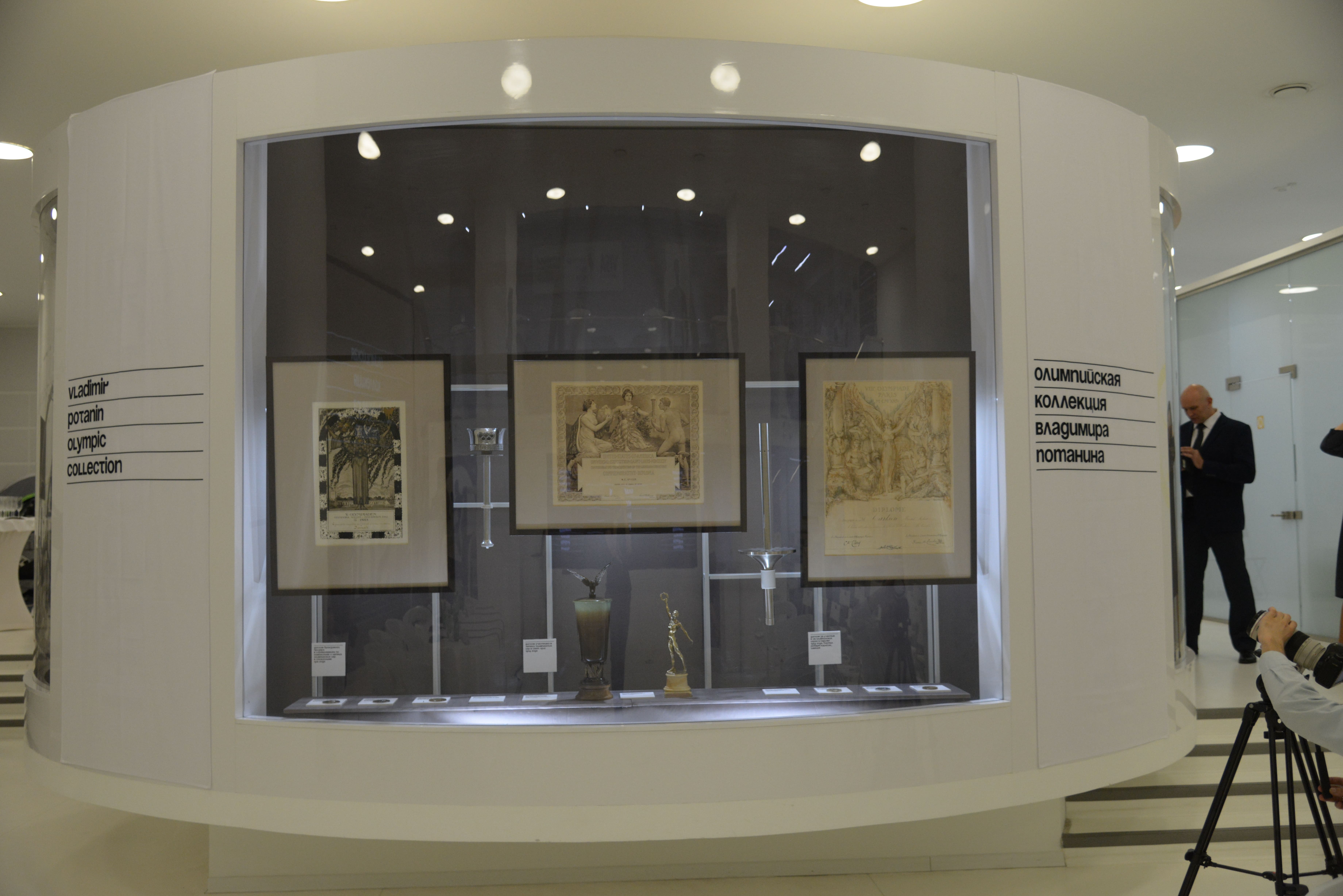 On June 13, the presentation of the Olympic collection of Vladimir Potanin was held in the Innovation Center of the Russian Olympic Committee (ROC). It contains unique items from all the Games of our time, from Athens – 1896 to Pyeongchang – 2018.

On June 13, the presentation of the Olympic collection of Vladimir Potanin was held in the Innovation Center of the Russian Olympic Committee (ROC). It contains unique items from all the Games of our time, from Athens – 1896 to Pyeongchang – 2018.

“Such a large collection of Olympic artifacts is presented for the first time, and we are very pleased that this happened within the walls of the Russian Olympic Committee and the Russian International Olympic University. I would like to thank Vladimir Potanin for his invaluable contribution to the preservation of the history of the Olympic Movement”, said Stanislav Pozdnyakov.

“This unique exposition should be seen throughout Russia”, added Igor Levitin, Assistant to the President of the Russian Federation, First Vice-President of the ROC. “It must be demonstrated in international and domestic competitions. I am ready to supplement the collection with several valuable artifacts and invite everyone to follow my example”.

For the first time a similar exhibition was organized during the 2014 Games in Sochi. At that time, in the House of fans of the Russian Olympic team, sports fans saw the Olympic torches from the collection of Prince of Monaco Albert II.

“The 2014 exhibition enjoyed a huge success”, noted Alexander Zhukov, Honorary President of the ROC, First Vice-Speaker of the State Duma of the Russian Federation. “The collection of Vladimir Potanin undoubtedly deserves to be represented in the Olympic Museum. I am sure that by the end of its construction, private collectors and sportsmen, who have Olympic relics, will respond to our appeal to expand the exposition”.

“There is a story behind each exhibit item”, said Shamil Tarpishchev, Member of the IOC. “Who remembers Lev Urusov, a member of the International Olympic Committee, who tried to unite the White Guards and the Bolsheviks in the sports arenas?! We are raising a whole layer of our Olympic history; this is a great undertaking. No sporting merits should be forgotten”.

Within a few days, the Olympic collection will be first introduced to the general public at the II European Games in Minsk.

“We not only keep more than 200 personal and award medals, 30 torches, 100 diplomas of winners and prize-winners of the Games, but we are also engaged in the restoration and verification of their authenticity”, said Lev Belousov. “No university in the world can boast of such work. We know what is missing in our collection, and we will hunt for the missing artifacts that represent not only historical but also artistic value”.

Rector of thee RIOU also noted that negotiations are currently underway with the Organizing Committees of the Olympic Games 2020 and 2022 on the organization of temporary exhibitions in Tokyo and Beijing.

“I welcome the idea of transportation of the collection all over the planet, because this is another reason to remember the people who forged the world sports history”, said Vladimir Potanin. “Despite the fact that all the exhibits were bought with funds donated by me, its actual owner is the non-profit partnership managed by the RIOU”.

During the presentation, Vladimir Potanin handed the diploma of the candidate city to Lev Belousov, presented to President of the Russian Federation Vladimir Putin during the election process of the host country of the 2014 Winter Olympics.

“When we received this paper, we had no idea that Sochi would become the Olympic capital”, Potanin said. “It reflects the excitement experienced during an anonymous vote prior to the announcement of the results. I hope the diploma will take a worthy place in our stunning collection!”