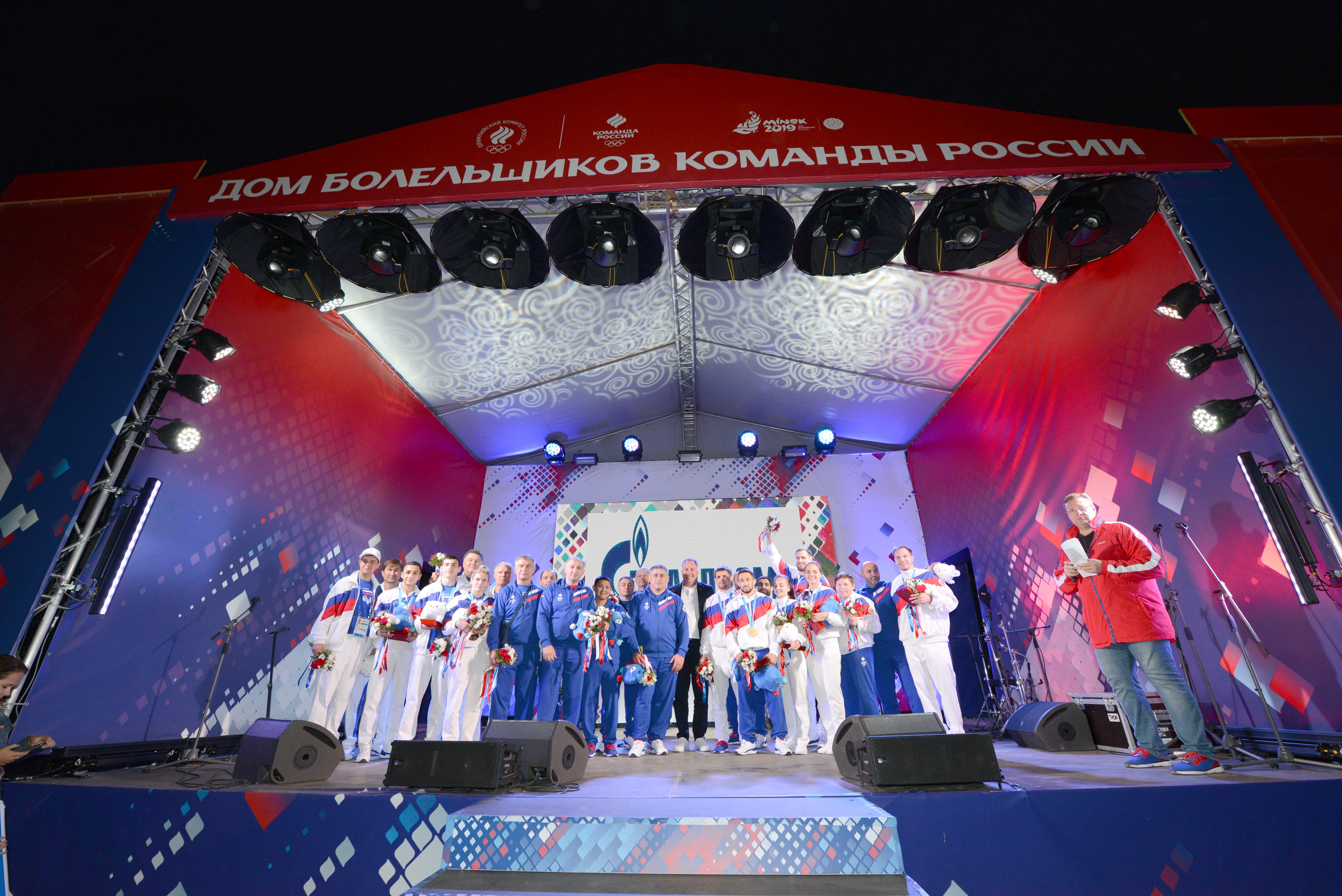 The 2nd European games are entering their last stage. The final day of the main sporting event of Europe was preceded by an extensive cultural program organised by the Russian Olympic Committee and the Russian Embassy in the Republic of Belarus.

The 2nd European games are entering their last stage. The final day of the main sporting event of Europe was preceded by an extensive cultural program organised by the Russian Olympic Committee and the Russian Embassy in the Republic of Belarus.

Starting from morning, the residents and guests of Minsk began to get familiar with the history of our country. One of the main fan zones of the European Games, located near the Palace of Sports and the Palova Arena, emerged as an extension of the House of Fans of Team Russia.

More than one thousand visitors gathered here joyfully supporting our athletes whose performances were broadcast on a large screen. Master classes were also held on samovar painting and weaving, Russian chess Tavreli, the basics and history of the Russian culture of hospitality and tea-drinking, and also an entertainment program was organised for children.

– We all are overwhelmed with a sense of belonging to the success of the 2nd European Games, – said Extraordinary and Plenipotentiary Ambassador of the Russian Federation to the Republic of Belarus Dmitry Mezentsev to the audience. – At the opening ceremony, the President of Belarus promised that fellow Belarusians would show their cordiality and hospitality. We can now see that the Games were organised on the highest level. The glorious history of the Olympic movement and victories will forever remain here in Belarus.

– If you look at the medal standings, then our two countries stand side by side, – said Stanislav Pozdnyakov. – This is very symbolic, because today our flags are also together high in the sky above this fan zone. I am sure that we will continue to keep pace with each other, just like athletes do.

Executive Director of the 2nd European Games, Simon Clegg, thanked the ROC and the Embassy of the Russian Federation in the Republic of Belarus for organising such a large-scale cultural event, as well as athletes from the Russian Olympic team for their amazing performance.

– 93 medals and first place in the team event. This is exactly what Team Russia wanted and they were able to achieve it, – added Mr. Clegg.

The numerous fans who flooded the square in front of the main stage of the fan zone were addressed by two famous Russian athletes – two-time Olympic champion in gymnastics Lidia Ivanova and two-time winner of the 2nd European Games, shooter Sergei Kamensky.

– It is a great joy to see so many people who came to celebrate with us the day of culture and traditions of Russia. Sport is an excellent platform for unification and friendship. And our countries are equally rich in talents. Dear, beloved Belarusians, the Games were a great success, – said the famous gymnast.

The culmination of the event, held against the backdrop of the Russian flag, was the performance of Timati. The Russian singer performed some of his greatest hits adored by fans, and also noted the importance of unifying music and sport.

Immediately after the completion of the cultural programme in the fan zone of the European Games, most of the fans, following the Street Band youth orchestra, went to the House of Fans of Team Russia for the traditional ceremony honouring the winners and medalists.

The evening turned out to be really special. An unprecedented number of well-wishers gathered in front of the entrance to the House of Fans to meet the winning athletes. Wrestlers with gold medals, boxers with silver medals and badminton players with bronze medals were literally stunned by the chants and applause. And that was the real reward!

The first to appear on the stage were the medalists of the day – bronze winners in the badminton doubles tournament Ekaterina Bolotova and Alina Davletova, as well as Vladimir Ivanov and Ivan Sozonov. Klavdiya Mayorova, the doyen of Russian badminton and senior coach Viktor Malyutin also received a round of applause and received talismans of the Russian Olympic team – a cat-like hat and a roly-poly toy bear.

– Congratulations to every athlete who has brought us an Olympic medal for our team, – said Vladimir Ivanov. – This would have been impossible without the support of fans right from the beginning of the European Games.

The wrestlers of the Greco-Roman style were the main athletes able to win the gold medals. Stepan Maryanian, Zaur Kabaloyev and Alexander Chekhirkin won all three finals. The ceremony honouring the medalists gave fans the opportunity to see the people who work behind the broadcasting and reporting – the staff and team mentors: head coach Gogi Koguashvili, general manager Vadim Kukhmaritov, the experts Basang Boktaev, Levani Kezevadze, Igor Ivanov, Valery Kapaev and David Kadilov, as well as doctor Marat Abdulpatakhov and masseur Kazbek Khamitsaev.

– It is pleasant to fight for the gold and feel all the support, – said Alexander Chekhirkin who was on the wrestling mat two hours earlier.

– Congratulations to the champions and medalists of the Games, and also to the leadership of the Russian Olympic Committee. We are looking forward to the same stellar performance at the 2020 Olympics in Tokyo, – said Gogi Koguashvili.

Beauty is a terrible force, capable of knocking opponents out if they are aloof. Looking at the female boxers dressed in white suits from the official outfitter of the Russian Olympic team ZASPORT, you might think that auditions are held before entering the national team.

Bronze medalist Daria Abramova in all her splendor appeared before the fans, along with silver medalists Gabil Mammadov and Khariton Agrba, head of the boxing federation Sergey Nazarov, coach of the women’s team Ayrat Bogdanov, mentors of the men’s team Yury Emelyanov and Rustam Umarov.

On the final day of the European Games, Svetlana Soluyanova and Muslim Gadzhimagomedov will fight for the gold medals respectively.

– The games are approaching their logical conclusion, – noted Stanislav Pozdnyakov, handing the ROC’s own awards to medalists and winners. – The dramatic tension of the combats and rivalry during the match increases more and more. I personally observed almost all the medalists who are on stage today. All of them tried very hard for the sake of victory.

Not only did all the athletes receive ROC awards, but they were also left with unforgettable impressions and what is more, they felt the powerful energy and emotional charge that could bring them luck for the Olympic gold in Tokyo 2020.

The long-standing traditions of the House of Fans of Team Russia – the performance of the anthem of the Russian Federation, the photography procedure, the signing of autographs and communication with fans – also took place.