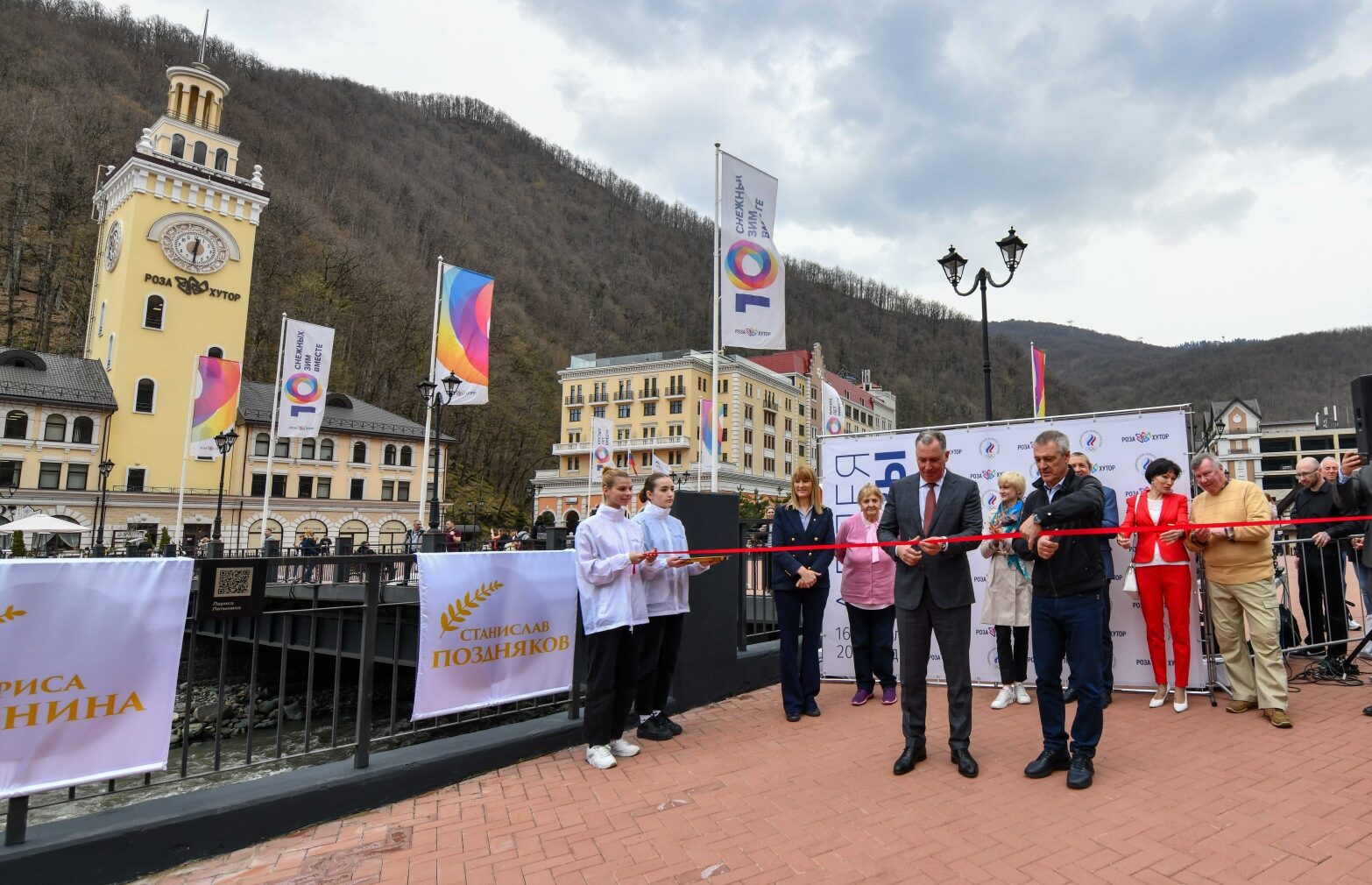 Today Rosa Khutor resort hosted the opening ceremony of the renovated Walk of Fame dedicated to Russian Olympic athletes’ outstanding achievements. The symbolic ribbon was cut by Stanislav Pozdnyakov, the 4-times Olympic champion, President of the Russian National Olympic Committee, and Alexander Belokobylsky, the Director General of Rosa Khutor. In honor of the head of the ROC’s sports victories, his personal medal was installed in the Walk.

Today Rosa Khutor resort hosted the opening ceremony of the renovated Walk of Fame dedicated to Russian Olympic athletes’ outstanding achievements. The symbolic ribbon was cut by Stanislav Pozdnyakov, the 4-times Olympic champion, President of the Russian National Olympic Committee, and Alexander Belokobylsky, the Director General of Rosa Khutor. In honor of the head of the ROC’s sports victories, his personal medal was installed in the Walk.

The Rosa Khutor year-round mountain resort is one of the main heritage sites of the XXII Olympic and XI Paralympic Winter Games 2014. The first competitions of the Games in Sochi were held here, and 30 sets of Olympic medals were awarded in 15 sports disciplines (alpine skiing, snowboarding, freestyle), which is almost one third of the total number of medals set (98), as well as 32 out of 76 sets of Paralympic medals. Even during the Games preparations, it was decided to create a special installation at the resort in honor of the Olympic champions, the great Soviet and Russian athletes. On the first anniversary of the Sochi Olympics, the Alley of Champions was opened at Rosa Khutor — personal gold stars of legendary champions appeared in the embankment’s paving. The first of them were named after famous Olympians — Lidiya Skoblikova, Irina Rodnina, Alexander Zaitsev, Svetlana Ishmuratova. In subsequent years, the tradition continued, and other titled athletes’ stars were installed at the resort. It was then decided to carry out a conceptual renovation of the Alley.

On April 16, 2021, the public was introduced to the new Walk of Fame. Its authors are sculptor Filipp Rukavishnikov and architect Alexei Dushkin. According to the creative idea, golden medals of Olympic heroes with their images, names, and sports titles surrounded by olive branches, which were used to decorate winners in ancient times, will be placed on the fence of the river Mzymta embankment along the central part of the resort.

As Stanislav Pozdnyakov, the ROC President, mentioned during the ceremony: “Rosa Khutor Walk of Fame is an interesting, in many ways unique and important project that maintains interest and respect for national sport among a wide audience and gives an additional incentive to cheer for Russian athletes, support them and learn about them as much as possible. The Walk of Fame carries, among other things, an educational mission, preserving the Olympic legacy and the memory of the achievements of our outstanding Olympians”. Alexander Belokobylsky, the General Director of Rosa Khutor Resort, said: “We are delighted that here in the Mzymta River valley, the names of our famous Olympians are heard again; thus, we also remember the glorious days of the Sochi Olympics. Rosa Khutor is probably the most sporting resort globally and definitely the most striking example of effective use of the Olympic legacy. Today it is the largest mountain resort in Russia, recognized as the best not only by the professional community (World Ski Awards – 2020) but also by our guests (Travellers Choice – 2020). About 1.7 million holidaymakers come here every year, and now they will also visit the Walk of Fame. I am sure that it will be one of the important attractions of Rosa Khutor”.

The Walk of Fame of Olympic champions will be developed further. The resort plans to install new personal medals in honor of the great domestic athletes in the future.

The Walk of Fame was created with the support of the ROSA Sports Club.

Rosa Khutor is a year-round world-class mountain resort, the largest Olympic facility of the XXII Olympic and XI Paralympic Winter Games 2014 in Sochi, located an hour drive from the international airport Adler. In winter, tourists have at their disposal 102 kilometers of ski trails designed by the world’s best experts and 30 ski lifts. In summer, hiking and biking trails along the scenic mountain slopes are in great demand. There are 15 hotels of different star classification in the resort. The resort features high standards of service and safety, as well as cutting-edge technology. Since 2013, Rosa Khutor has been recognized as the best ski resort in Russia by the World Ski Awards. In 2020, according to Tripadvisor users, it was awarded Travellers Choice status.