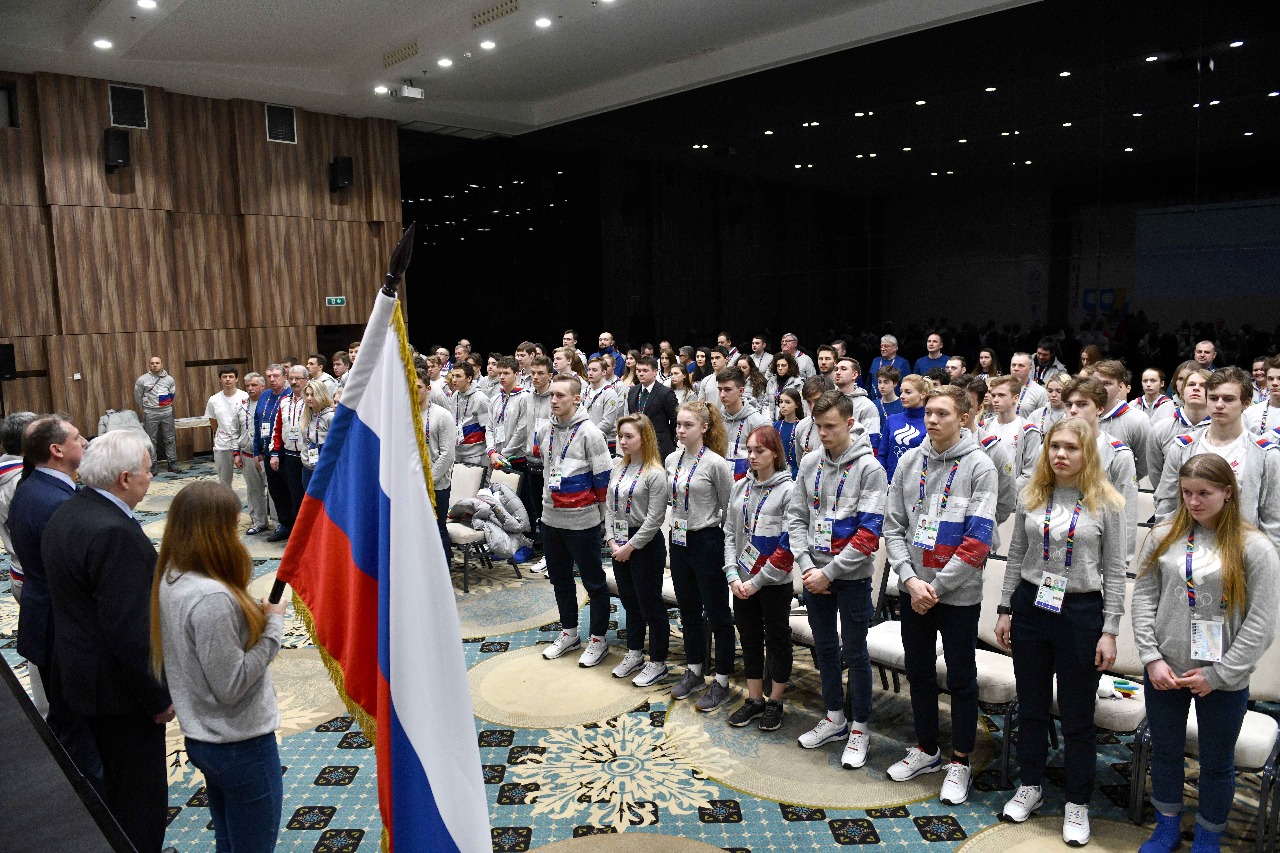 The XIV European Youth Olympic Winter Festival has ended in Sarajevo. Russian athletes won 12 medals – two gold, seven silver and three bronze ones. On February 15, a ceremony honouring the winners was held at the HILLS hotel which became an Olympic Village over the course of the festival.

The XIV European Youth Olympic Winter Festival has ended in Sarajevo. Russian athletes won 12 medals – two gold, seven silver and three bronze ones. On February 15, a ceremony honouring the winners was held at the HILLS hotel which became an Olympic Village over the course of the festival.

ROC Director General Vladimir Sengleev was the first to take the floor.

– For many of you, this is the first integrated Olympic competition, – he stressed. – In the capital of Bosnia and Herzegovina, you have become a part of the large Olympic family and you have taken the road that paves the way to high achievement sports. We will closely monitor your progress and I am sure that we will surely meet with many of you at numerous Olympic competitions. It is pleasant that the geography of youth sports is expanding. The festival was attended by representatives of 18 regions of the Russian Federation – from Moscow to Tyumen region and Sakhalin. Medals were won in sports where we are traditionally strong (biathlon, short track and cross–country skiing), as well as alpine skiing. Seven Olympians are bringing home silver medals. This indicates their high potential.

– One of the priorities of the Russian Olympic Committee is to create favorable conditions for the preparation of our athletes for the Olympic Games, – continued Vladimir Sengleev. – It would have been impossible without the support of sponsors and partners such as PJSC Gazprom, Aeroflot and ZASPORT company, the official outfitter of ROC. I want to wish all the participants of EYOF-2019 good luck, hard work, patience and success!

The Extraordinary and Plenipotentiary Ambassador of the Russian Federation in Bosnia and Herzegovina, Peter Ivantsov, noted that the Russian team represented Russia in a dignified manner at the festival in Sarajevo.

– You have become an important part of the important sports festival hosted by Bosnia and Herzegovina once again many years later. Russia is loved and respected here. I think that you also felt this during competitions. Congratulations to all the medalists, and as for those who did not win any awards to I urge you not to be extremely upset. You have only taken the first Olympic step, each of you has a long, interesting path ahead, and I hope it will be a successful one.

Chief designer and founder of the ZASPORT brand Anastasia Zadorina stressed the importance of the participation of young athletes in the integrated Olympic competitions.

– Not all of you will return home with medals, but for every participant this festival has definitely become an important milestone in their sports career. You have gained a new experience that will definitely come in handy during future competitions. I sincerely wish you good health, good results and positive emotions.

35 years ago, in Sarajevo, speed skater Sergei Fokichev won the Olympic gold medal in the 500-meter race. Addressing the younger generation, he emphasized that in sport there is always room for new victories.

– I attended many competitions and ardently supported our team. Some athletes were excellent, others like the hockey players, for various reasons, failed to achieve their full potential. In any case, the young athletes should make the right conclusions and move on! Go for it and gain more experience! We are waiting for you in the large and friendly Olympic family.