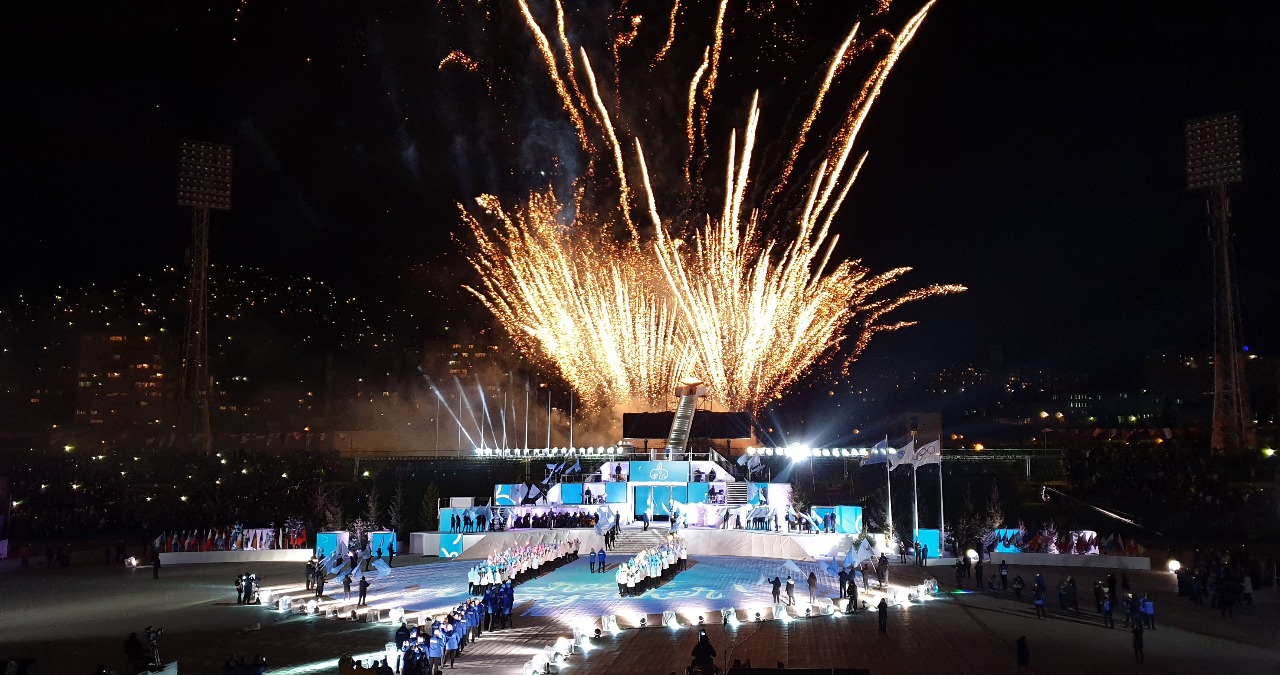 In the capital of Bosnia and Herzegovina, the 14th European Youth Olympic Winter Festival has been launched. The opening ceremony was held at the Asim Ferhatović Hase Olympic stadium and generated enormous excitement in Sarajevo.

In the capital of Bosnia and Herzegovina, the 14th European Youth Olympic Winter Festival has been launched. The opening ceremony was held at the Asim Ferhatović Hase Olympic stadium and generated enormous excitement in Sarajevo.

It seemed that almost all the population of the city nostalgic for its Olympic past had gathered at the entrances to the arena. Unprecedented security measures and strict ticket control caused overcrowding, but still did not prevent a lot of accredited journalists having to sit on cold concrete steps in the press sector.

The eastern part of the stadium became the main site of the event — it was from this sector that the official delegations entered the round illuminated stage and then quickly disappeared into the darkness under the stands.

The Russian team’s flag-bearer was junior hockey Red Machine captain Marat Khusnutdinov, who had promised before leaving Novogorsk to “fight to the end and return home with medals”.

The Russian delegation, which includes 61 athletes (figure skaters Anna Shcherbakova and Ilya Yablokov are arriving in Sarajevo on 11 February – author’s note), was one of the largest at the parade, whilst the teams of Albania and Portugal were represented at the Asim Ferhatović Hase stadium by only two athletes each.

However, the size of the delegations did not in the least affect the friendly reception from the audience. All the 46 teams were equally applauded.

Then EYOF–2019 participants were addressed by President of the European Olympic Committees (EOC) Janez Kocijančič.

— The European Youth Olympic Festival is your first Olympic experience. History shows that a lot of Olympic champions emerged from the winners of the EYOF. Don’t miss your chance! Good luck!

— I watched the opening ceremony of my first Games on TV, — the celebrated athlete recalled in a conversation with a ROC Information Service correspondent. — The Olympic flame in Sarajevo was lit on 8 February, and two days later I was scheduled to compete. To avoid catching a cold, I stayed in my room although I really wanted to go to the Asim Ferhatović Hase stadium.

— Do you remember your “gold” race well?

— I got the draw to compete in the first pair and on the long lane as well. In addition, on the morning of 10 February, it had snowed heavily in Sarajevo. The whole rink was covered with snow, and it was decided to postpone the competition. I returned to the Olympic village. I went to bed, but soon there was a knock on the door. It turned out that the organisers had suddenly reversed their decision, so I rushed back to the stadium, where the warm-up had already begun. I even hardly had the time to worry about anything. And I won!

— What would you wish for young Russian athletes?

— First of all, faith in their strength. If they’ve decided to devote their lives to professional sports, they should use all this time in such a way that they don’t feel annoyed about the lost opportunities later on. Stay focused on victory…

The culmination of the opening ceremony, which was conducted in line with all the Olympic canons, was the lighting of the flame. It was lit by famous Bosnian judo wrestler Larisa Ceric, who had to overcome a few dozen steps up a staircase, which very much resembled a Moscow metro escalator.

On Monday, the names of the first champions of the Festival will be announced. Medal competitions will be held in cross-country skiing, short track and alpine skiing.