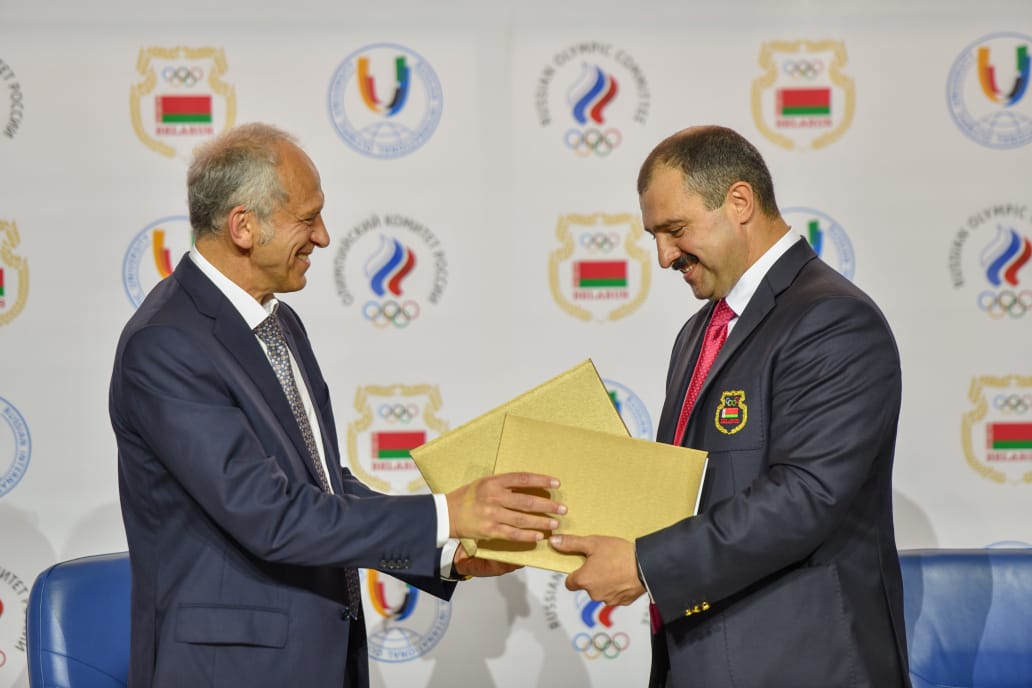 The honorary guests of the event were the head of the ROC, Stanislav Pozdnyakov, including famous Russian and Belarusian athletes.

– We are pleased with the expansion of strategic cooperation between the NOCs of Russia and Belarus, – said Stanislav Pozdnyakov. – The educational programs of RIOU are of great interest to our Belarusian colleagues. I am sure that after signing the Memorandum, the number of RIOU students from this country will increase significantly. I would like to once again wish success to the Russian and Belarusian athletes at the 2nd European Games!

In recent years, more than 60 specialists from Belarus have graduated from RIOU. According to Viktor Lukashenko, the signing of the Memorandum of Cooperation will take the Olympic education in the country to a new level.

– We receive only positive feedback from athletes and coaches who have been trained at RIOU. Our specialists use the gained knowledge for benefiting the development of the Olympic movement in Belarus and the whole world, – emphasised the Acting First Vice-President of NOC Belarus.

Lev Belousov spoke about the history of creating the Russian International Olympic University and its main programmes, and also noted that representatives from more than 50 countries had already completed instruction in the university.

– Within the past ten years, our University has become one of the leading sports universities in the world. RIOU students were given lectures by the President of the IOC, Thomas Bach, members of the IOC Executive Committee René Fasel and Gunilla Lindberg, as well as many other leaders in the international Olympic movement and Russian sports stars. They convey to our students their rich practical experience and invaluable knowledge.