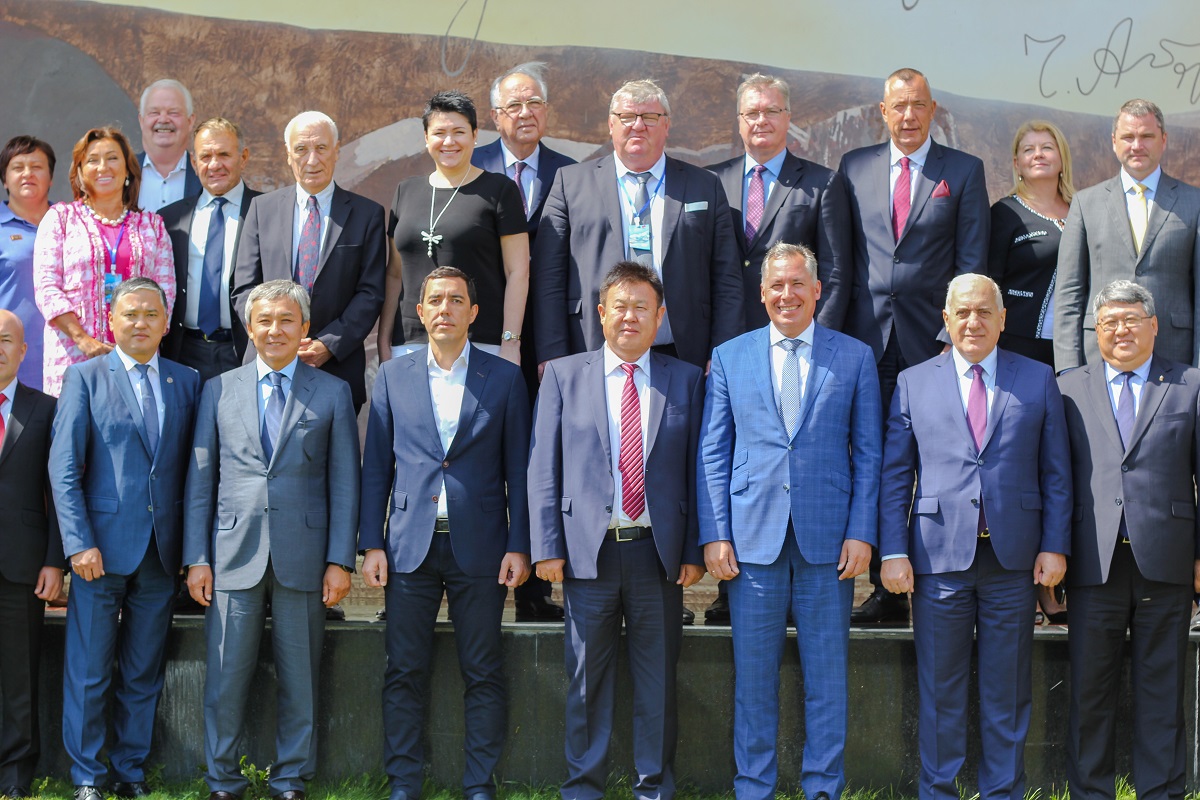 The annual Forum of the National Olympic Committees of the CIS, the Baltic states and Georgia was held in Kyrgyzstan

The 21st International Forum of the National Olympic Committees of the CIS, the Baltic States and Georgia was held at the Ruh Ordo Cultural Centre on Lake Issyk-Kul.

– The Forum is held in order to exchange information and experience regarding the most interesting, relevant projects and programmes that are implemented by the National Olympic Committees, as well as to support and develop good neighbourly relations between our countries and strengthen personal contacts between representatives in the sports industry, – said Yury Yuryev, Coordinator of the Forum, Deputy Secretary General and Head of the International Relations Office of the ROC.

Sharshenbek Abdykerimov, President of the National Olympic Committee of Kyrgyzstan:

– We are pleased to welcome all participants and guests of the Forum to Issyk-Kul. During the Forum, important issues on the preparation for the 2020 Summer Olympics in Tokyo were discussed, as well as various projects in the sphere of public sports. I am sure that our cooperation will make a valuable contribution to the further development and promotion of the Olympic movement on the territory of each participating country.

During the business programme, the head of the ROC, Stanislav Pozdnyakov, presented his colleagues with a plan for organising festive events dedicated to the 40th anniversary of the Moscow Olympics in 1980, and invited Forum participants to attend the anniversary celebrations next June.

– The current Forum, in my opinion, turned out to be very productive in terms of the business part, and the cultural programme was extremely interesting as well. I would like to thank our colleagues from the National Olympic Committee of Kyrgyzstan and personally the President of the Committee, Sharshenbek Abdykerimov, for the excellent organisation of the event and the warm welcome that all the participants and guests of the Forum received in hospitable Kyrgyzstan. I am very glad that once again we all have met together and discussed various topics regarding future cooperation. We also shared the experience of holding large multi-sport competitions and events in the sphere of public sports.

On our part, we invited all colleagues from the 14 countries participating in the Forum to Moscow to celebrate the 40th anniversary of the 1980 Olympic Games, and we also proposed to hold joint international judo gatherings for representatives of the National Olympic teams.

During the Forum, leading experts from the Olympic Committees of the CIS, the Baltic states and Georgia gave presentations where the following topics were discussed:

– Olympic sports in the run-up to the 2020 Summer Olympics in Tokyo;

– Legacy of the 2nd European Games;

– Results of the European Youth Olympic Festival in Baku;

– The project “Encyclopedia of Olympic sports” and its role in the system of Olympic education.

The Director General of the ROC Vladimir Sengleev also gave a speech during the event. He spoke about the ROC’s bid to host the 8th TAFISA World Sport for All Games in 2024.

– First of all, I would like to highlight fact that all our colleagues who took part in the Forum are implementing their projects and programmes today according to the highest international standards. The scope and level of the tasks at hand have increased significantly in recent years, as have the capabilities of almost all 14 National Olympic Committees. This would not have been possible without support from their respective countries, indicating the important role that sport and Olympism play today. Today we had constructive dialogues and we discussed pressing issues. Now we are ready to share our experience and use the best practices for further joint effective development.

Russia is a reliable partner in this regard. While we were participating in the Forum here in Kyrgyzstan, a group of specialists from the ROC’s Innovation Centre, headed by Alexander Grushin, was working in Uzbekistan, where they provided assistance in improving qualifications for coaches and specialists. This is a very important and significant moment.