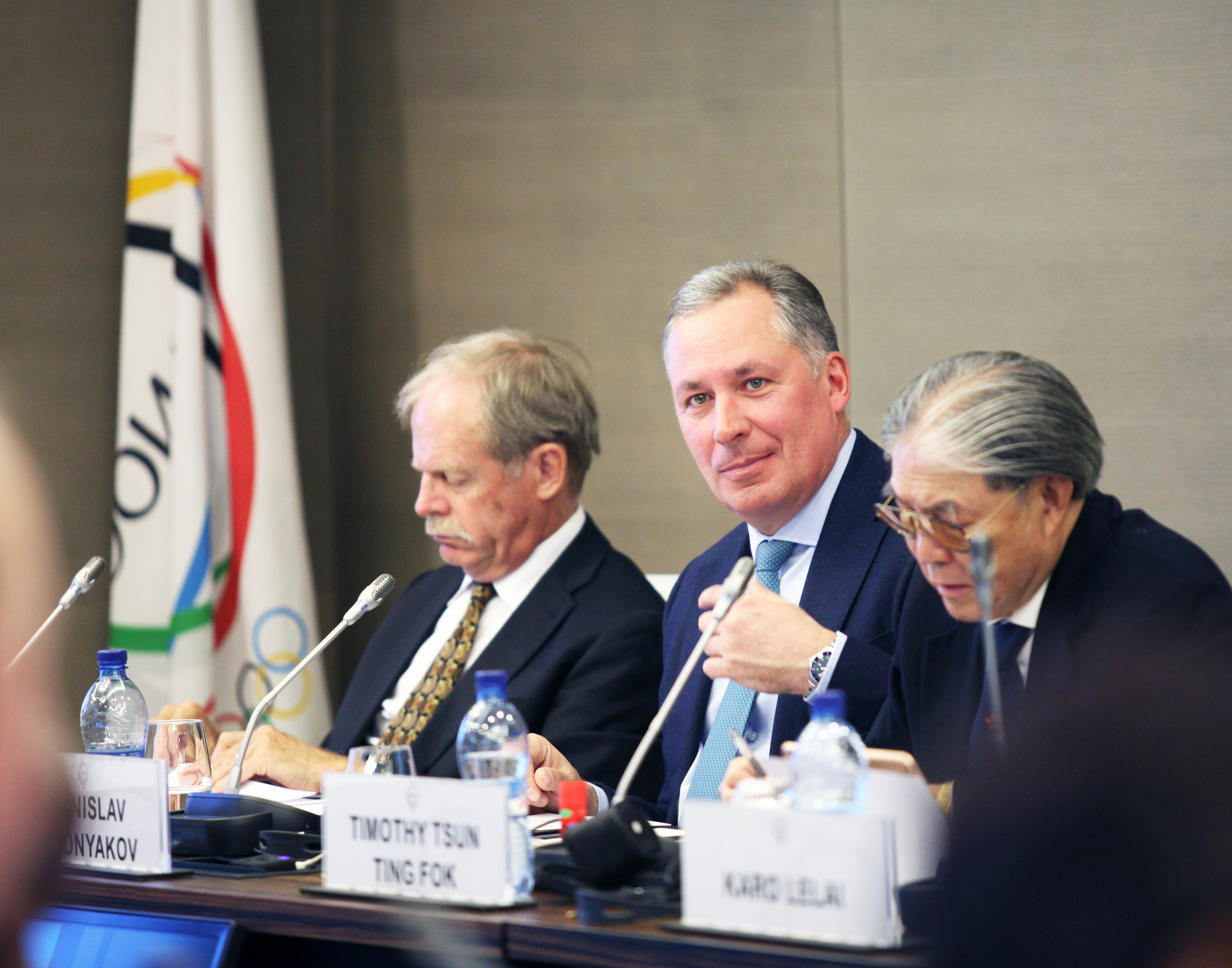 Today the scheduled meeting of the ANOC Executive Council took place in Lausanne at ANOC Headquarters. Stanislav Pozdnyakov was present at the meeting as the Chairman of the ANOC Culture and Education Commission.

Today the scheduled meeting of the ANOC Executive Council took place in Lausanne at ANOC Headquarters. Stanislav Pozdnyakov was present at the meeting as the Chairman of the ANOC Culture and Education Commission.

The ANOC Executive Council meets at least twice a year at the initiative of the President of the organization or at the request of members of the Council. The main objectives of the scheduled meetings are to summarize events held with the participation of NOCs of different countries on all 5 continents, to discuss the challenges facing the Olympic movement around the world, and to determine strategic directions for future development.

This time round high on the agenda were the results of the 1st ANOC World Beach Games held from 12 to 16 October 2019 in Doha. ANOC Secretary General Gunilla Lindberg gave a detailed report on all aspects of the Games. More than 1200 athletes from 97 countries participated in the World Beach Games, competing in 14 disciplines. The Russian Olympic team was represented by 55 athletes winning seven medals (2-2-3). Gold was won by the men’s 3×3 basketball and Waterski team.

According to ANOC’s Secretary General, organizing the World Beach Games promotes the beauty and vigor of sports not yet included into the Programme of the Olympic Games or continental multisport events. What is more, the budget of the Beach Games is relatively small, as a result, the legacy of holding such an event for any city will be significant and worthwhile.

Gunilla Lindberg also noted that, in general, the World Beach Games received praise from the NOCs and international sports federations, arousing interest from both local and foreign fans alike. Therefore, ANOC intends to hold such competitions once every two years. Furthermore, she announced the start of the application procedure for the 2021 and 2023 ANOC World Beach Games. There is already preliminary interest from potential candidate cities.

Numerous discussions were also held regarding the amendments to the Olympic Charter, in particular to Rule 40. James MacLeod, IOC Director of Olympic Solidarity and NOC Relations, spoke about the progress made in clarifying the new provisions to the Rule. According to the amendments, athletes and sports federations can now participate in advertising campaigns during the Olympic Games, but they must comply with the rules set forth by the IOC. In particular, Olympic symbols may not be used when advertising. Advertising tobacco, alcohol, and gambling is totally prohibited. Advertising should be general in nature. In order to obtain permission for the Tokyo Games, all applicants must notify the Japanese Olympic Committee in writing no later than May 15, 2020. Or, if the athlete passes the pre-qualification after the deadline, a notification must be sent no later than 15 days before publishing the advertisement.

Despite the fact that the amendments made were welcomed by athletes, there still remain several legal subtleties and regional specifics (athletes from the EU for instance), which are to be clarified in the near future. On a separate note, IOC representatives informed the Executive Council members that general methodological materials will be published no later than March 2020 that will aim to clarify all the opportunities and limitations provided for by the amendments to Rule 40 which have now come into force.

Topics related to the WADA-RUSADA dispute brought before the Court of Arbitration for Sport (CAS) were not widely discussed due to the absence of WADA representatives at the meeting. However, EOC Secretary General, Raffaele Pagnozzi, expressed great concern during his speech about the possible restrictions for Russian athletes, which could emerge if CAS officially revokes RUSADA’s compliance status. “Russian athletes form an integral part of the Olympics! And we must ask ourselves how fair it is to separate clean Russian athletes from clean world athletes and force them to use a neutral flag. This situation is hurting the Olympic movement in Europe, and we hope that the dispute is resolved as soon as possible,” concluded Raffaele Pagnozzi.

The next scheduled meeting of the ANOC Executive Council is scheduled for June 15, 2020. It will once again be held at ANOC Headquarters in Lausanne, the Olympic capital.