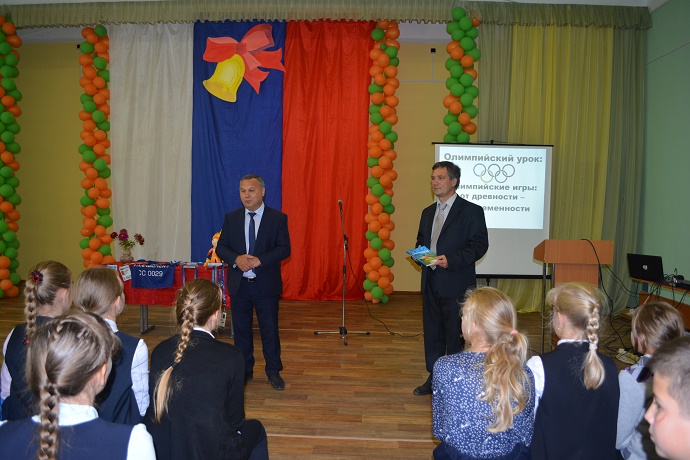 Starting from this academic year the schools of Chaikovsk will implement a pilot project of the  Prikamye Olympic Academy and the Chaikovsk State Institute of Physical Culture called ‘My first Olympic Lesson’.

This academic year the schools of Chaikovsk began the implementation of a pilot project of the Prikamye Olympic Academy and the Chaikovsk State Institute of Physical Culture called ‘My first Olympic Lesson’.

At the school lessons  fifth-graders not only got acquainted with the history and traditions of the Ancient Olympic Games staged in Greece, the modern Olympic Games, saw fragments and heritage of the 22nd Winter Olympic Games and the 11th Winter Paralympic Games, held in 2014 in Sochi, they also held the Olympic torch in their hands, took pictures of had their pictures taken with the Ray of Light and the Snowflake, the mascots of the Paralympic Games. In understandable terms teenagers were told about the essential component of all sports events, safety.

They focused on the doping problem. Modern edition of the ‘Your Olympic Manual’ textbook, published by the ROC, were presented to the school libraries. Olympic education among the younger generation in the region, carried out by the Prikamye Olympic Academy in cooperation with the Chaikovsk State Institute of Physical Culture, is not a fragmentary event. During the educational internship at schools college students will give advisory lessons on the topic of ‘The Olympic Games, from Ancient to Modern  Times’, sports events, devoted to the Olympic values.