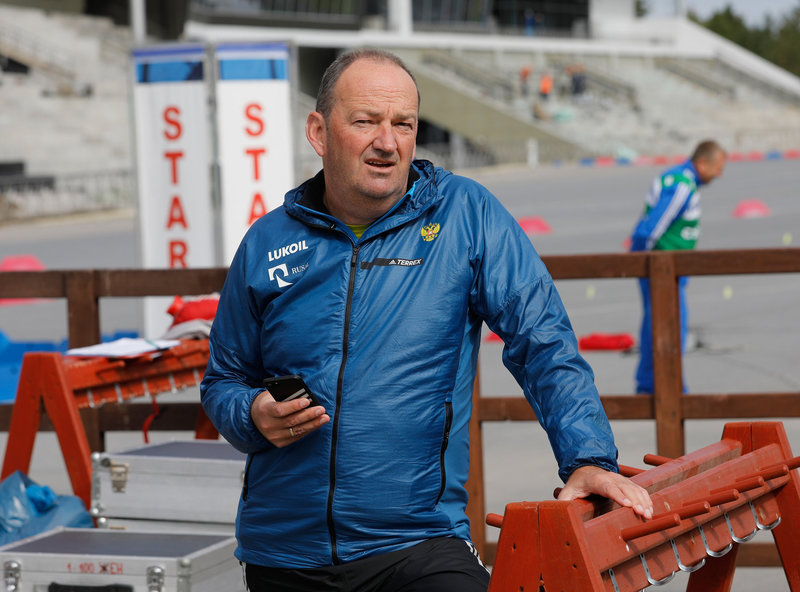 Marcus Kramer: “At the Olympic Games Denis Spitsov surprised me most”

Marcus Kramer, the coach of the Russian national Cross-Country Skiing team, gave an interview to the ROC Information Service. German expert spoke about his expectations before the Olympic Games, pointed out the results, that surprised him in Pyeongchang, told about the prospects of future work with our team.

Marcus Kramer, the coach of the Russian national Cross-Country Skiing team, gave an interview to the ROC Information Service. German expert spoke about his expectations before the Olympic Games, pointed out the results, that surprised him in Pyeongchang, told about the prospects of future work with our team.

– The season is almost over. There is only one event left, the Championship of Russia, to be held in Syktyvkar from 24 March to 1 April. Will you be there?

– Of course. The Championships will stat on Saturday with the women’s and men’s sprints. I’ll come the night before. It is very interesting to watch both the athletes from the national team and the nearest reserve. The level of competition will be high. Two years ago I went to the Championship of Russia, held in Tyumen, and last year I was in Khanty-Mansiysk.

– It was announced that the Sochi 2014 Olympic champion Alexander Legkov, one of the national team leaders Sergey Ustyugov and other skiers who could not take part in the Olympic Games will participate in this competition. Among other things, you will probably want to check their mood, will you?

– Certainly. Ustyugov, did not go to the Olympic Games, was ill, did not have enough trainings before the subsequent World Cup stages and missed them. I’ll be glad to see him back in line. We’ll talk to the guys about the next season.

– And perhaps, about the more remote prospect?

– Sergey Ustyugov is young (April 8, he will turn 26), so he has to prepare for the Olympic Games in Beijing. As for the 34-year-old Legkov, it is clear that he will not be able to perform in four years, but I hope he will find motivation for another season. The World Cup in Austrian Seefeld still lies ahead, after all.

– You said you wanted to sign a new contract with the Cross Country Ski Federation of Russia? When can this possibly happen?

– We discussed the issue with the President Elena Vyalbe, the other day in Falun. It remains to agree on some details. The President wants me to continue working with the national team. I, in turn, am very motivated, because I know that Russia has a strong and promising team, which is able to show good results in the nearest future. I hope I can work with it in the following four-year period.

– Now we are talking about an agreement for four years.

– What does your family, living in Germany, think about it?

– It always supports me. My daughter is 23. She lives an independent life. My wife knows that my job is connected with frequent business trips. It’s been going on for over 30 years, so nothing new is happening.

– You have an apartment in Moscow?

– What are you talking about? My house is in Germany. The training camps and competitions are often held in Western Europe, sometimes relatively close to my home, and then my wife, sometimes, joins me for a few days. Sometimes, though, I have to spend 4-5 weeks away from home, but that is the reverse of the job.

– In Pyeongchang, Russian skiers won eight awards – three silver and five bronze. Did you expect such a harvest?

– Of course not! When we went to Korea, I thought that maybe we would win one or two medals, but from the very beginning everything went ok. The young team fought, strived for the maximum result, the skis were well prepared and it seemed that the athletes had wings behind their backs. They felt that they were able to fight against the best and defeat them.

In addition, the guys fought for each other, and for those who stayed home. The athletes wanted to show that the Russian ski team is strong, that they succeed without doping.

– You probably dreamed of one or two medals of after they banned Ustyugov, Legkov, Vylegzhanin, Matveyev, Chekaleva and others. And before that?

– Initially, I, of course, expected more, at least five medals, as in Sochi (at home games, Russian skiers won one gold, three silver and one bronze). But I thought that for the youth team a much more humble result would be good enough.

– A year before the Olympic Games, the ROC organized a trip to the World Cup stage, held in Korea, for a group of experts of the Cross Country Ski Federation of Russia, including service staff who had the opportunity to test the snow and study the track. Was that visit useful?

– It was very useful. Then the World Cup stage in Skiathlon was won by Pyotr Sedov, a member of my group. It is a  thinking guy who knows how to capture the peculiarities of the track. He told me in detail about its features, noted what to pay attention to. We also studied the sprint track.

In general, our team had a very high-quality preparation for the Olympic Games. And already in the course of preparation the service staff proved to be excellent. I was the only coach, so together with the manager Yury Charkovsky we were engaged in all daily organizational routine from morning till late night. It wasn’t easy.

– What result in Pyeongchang surprised you most?

– Bronze won by Denis Spitsov, in 15 km Freestyle. I knew that this young man showed good results at the World Cup. But the Olympic Games is a special case. Anyway, he gave me a big surprise. And then he and Bolshunov gave another pleasant surprise, taking silver in the team sprint. After all we went on risk. It was planned that Alexey Chervotkin will run in pair with Bolshunov. But after an illness he was not 100 percent ready. So I decided to put Spitsov.

Another surprise was the women’s relay team. It was important for me that not only men, but also women, perform successfully, because the results of the skiers were still quite humble. And the young girls fought against the strongest. Natalia Nepryaeva from the first stage led the race, as well as  Julia Belorukova.

– Bolshunov, as well as Chervotkin, arrived in Pyeongchang after the illness, and suddenly immediately won the bronze medal in the Sprint. How can you  explane that?

– The coach Yury Borodavko did a very good job. After Bolshunov and Chervotkin were left the hospital, he took them to the training camp in Seefeld, Austria, and watched them as they recovered step by step. Chervotkin arrived in Korea a few days after Bolshunov, and it was the right decision, made by Yuri. He knows what’s best for his skiers.

– You took a risk not only in determining the composition of the team sprint, but also earlier, when you included Chervotkin into the relay team. Did the risk pay off?  After all Alexey did not show the best result on his stage.

– We, certainly, took the risk, because we did not know his level of preparation precisely. But I think, we did the right thing. Chervotkin was not in the best, but still in a pretty good shape. If Ustyugov and Legkov came to Pyeongchang, we would have had a choice. And in the given circumstances we had not so many opportunities.

– All country regretted that Bolshunov didn’t manage to win a distance of 50 kilometers. He made a mistake, deciding not to change the skis before the finish?

– Absolutely. He obviously  thought: ‘I can escape while Niskanen is changing the skis’. Bolshunov is a young skier, who had just a few marathons in his career. His mistake is understandable. Next time he won’t make it.

– Within the last season the gap between our ski team and the national team of Norway has decreased?

– Undoubtedly. In the Nations Cup standings on the result of the World Cup stages this season Norway is the leader (both men and women). Russia is in the third place in general, but among men it is on the 2nd position. The other day in Falun I talked with the Norwegian coach Thur Arne Hetland, Olympic champion of Salt Lake City 2002. He praised our relay team and said straightly that Russia is now their main competitor.